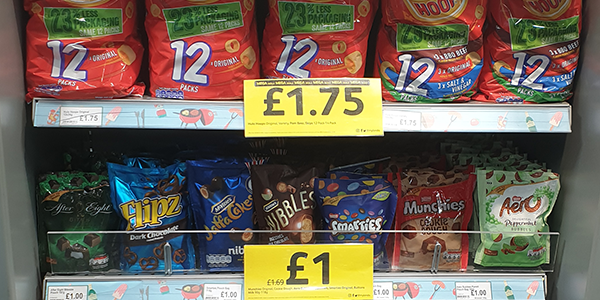 The NFRN has welcomed the government’s decision to delay new legislation restricting the placement and promotion of high fat, salt and sugar (HFSS) products within shops until October 2022.

The new rules were originally due to come into force next April but, following consultation with the retail industry, the date has been put back to allow more time to make the necessary changes to store layouts.

Under the new policy, local shops and supermarkets over 2,000 sq. ft and with more than 50 employees will no longer be able to place HFSS products at store entrances, checkouts, end of aisles and designated queuing areas.

However, the government says the regulations should also apply to smaller independent retailers trading under brands such as Spar, Nisa and Costcutter.

As part of the consultation process earlier this year, we pointed out the unfairness and inconsistency of including independent retailers who operate under a symbol banner, and called for the government to delay the changes until April 2023 at the earliest.

The last 18 months have been hard enough, without this extra burden on retailers. At least the government has listened to some degree regarding the timing of the new legislation by delaying it for six months.

Further details of the new Covid-19 regulations have been...

The NFRN have put together an end of year...

17/12/2021
Government cover wrap to appear on all national and regional newspapers this Monday.
Read More

13/01/2021
HM Revenue and Customs (HMRC) has revealed that almost 25,000 Self Assessment customers have set up an online payment plan to manage their liabilities in up to 12 monthly instalments, totalling £69.1 million.
Read More

22/09/2020
The members of the All Party Parliamentary Group (APPG) on Retail Crime at the UK Parliament have submitted a response to the Sentencing Council’s consultation on assault offences.
Read More
This website uses cookies to improve your experience. We'll assume you're ok with this, but you can opt-out if you wish. Read More Cookie settings ACCEPT Reject
Privacy & Cookies Policy