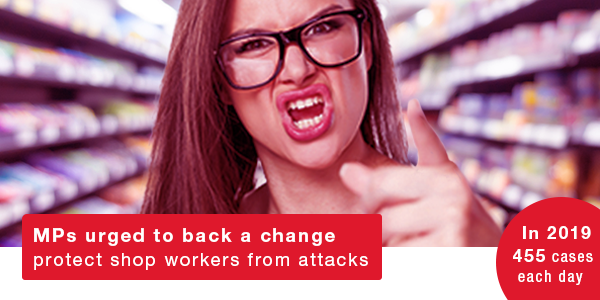 Independent retailers are pressing MPs to support an amendment to the Police, Crime, Sentencing and Courts Bill at a debate in the House of Commons later today. (July 5)

Stuart Reddish, National President of the Federation of Independent Retailers (NFRN), has written  to all MPs in Westminster asking them to back amendment NC31, which will give new and important legal protections to those working in the retail sector who are victims of verbal or physical abuse.

As the representatives of the owners of over 15,000 news and convenience stores across the UK, the NFRN would ask you to support the amendment.

The British Retail Consortium’s most recent crime survey shows a 7% year-on-year increase in incidents of violence and abuse in 2019 – a shocking total of 455 cases each day.

Recent research by retailers shows that the rate of incidents has risen even further during the coronavirus pandemic, as our members have worked hard to support their local communities and provide a shopping environment that is safe for customers and staff alike.

No-one should face verbal or physical abuse just for going to work, but this has, for too long, been the reality of working in the retail sector.

I would therefore ask you to stand with those who work so hard to serve their local communities, oppose threats and violence against retail workers and to support amendment NC31 this evening.

The proposals in the amendment will give retailers in the rest of the UK the same kind of protection that has already been passed by the Scottish parliament, and are in line with the recommendations of the Select Committee on Home Affairs in its recent report on the issue.

Smiths News has released a letter regarding alterations and...

Be prepared – that’s the advice from NFRN National...

Barclays Applauded for Acting on Retailers’ and Customers’ Concerns

25/10/2019
The NFRN has applauded Barclays for listening to the concerns of customers and retailers and scrapping its plans to stop customers from withdrawing cash at Post Offices. Our members had reacted angrily after the bank announced that from the New...
Read More

21/04/2020
Boost Drinks are sending out packages to nominated independent retailers across the mainland UK and NI, in recognition of their bravery and hard work during the Coronavirus outbreak.
Read More

Add The NFRN To Your Home Screen