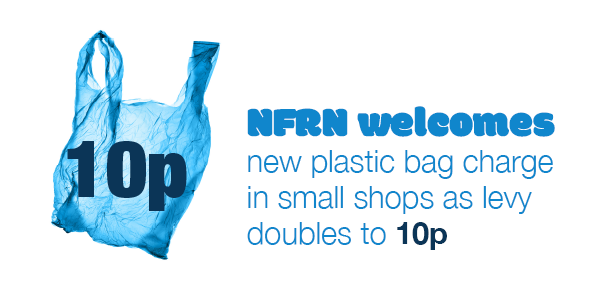 From today, small shops in England must charge 10p for carrier bags – a move welcomed by the NFRN which has campaigned tirelessly for the levy to be extended.

We’ve been pushing for this for the last six years and now we’ve finally got a level playing field that we can actually do this.

A lot of smaller retailers do make a charge already, and that money goes into local charities.

It’s about being eco-friendly. We’ve seen how plastic can devastate the oceans, and cause massive problems for landfill. I just hope the customers understand why it’s necessary.

The government expects the use of single-use carrier bags will decrease by 70 per cent to 80 per cent in small and medium-sized businesses now the charge has been expanded.

Everyone wants to play their part in reducing the scourge of plastic waste that blights our environment and oceans. The 5p bag charge has been hugely successful, but we can go further.

From today we will increase the charge to 10p and extend it to all businesses. This will support the ambitious action we have already taken in our fight against plastic as we build back greener.

The NFRN has produced posters for retailers to display in-store to advise customers that they will now have to pay 10p for a single-use carrier bag. They can be downloaded here

Previously, when commenting about the charge being extended to smaller stores, Mr Reddish has said:

It has always seemed odd that members in Wales, Scotland and Northern Ireland charged their customers for single-use plastic bags, while smaller stores in England were not included in the legislation.

The carrier bag charge has made a huge difference by drastically cutting the use of single-use plastic bags so we are delighted that smaller retailers can now play an even greater part in reducing waste and raising money for good causes.”

Get on the road to Qatar

Football fans and collectors can join in the build...

Call For Review Into Fairness As Newspaper...

The Federation of Independent Retailers (NFRN) has renewed calls...

Now that the district has taken the momentous decision...

29/09/2021
We recently advised members that a retailer in Scotland received a call asking her to rate her satisfaction with Camelot, which she believed to be bogus.
Read More