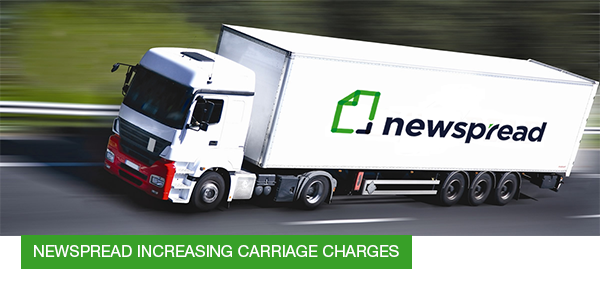 The rises, which average 3.5 per cent, came into effect on Sunday (June 6) but there was no official or advance notification.  Retailers only became aware if they spotted the news in small print on their invoices.

The vice president of the Federation of Independent Retailers (NFRN) Muntazir Dipoti, who is also chairman of its news operations committee, said:

Given that other news wholesalers have suspended their annual carriage charge reviews given the difficult trading conditions that all retailers have experienced over the past 18 months, the fact that Newspread has not only conducted a review but also increased its charges is a real blow. What makes matters worse is that many news retailers were completely unaware as the news was hidden away at the bottom of its paperwork. This is a real blow.

Newspread only confirmed its carriage charge hikes to the NFRN’s head office after the event.  In an email, its operations director Grace McPhail said that the increases took effect from last weekend, adding that 100 retailers had seen their carriage charges rise. She added that 300 retailers had moved to a lower band because of their weakened trading conditions.

The NFRN has asked Newspread to confirm its intentions for its retail customers in the Republic of Ireland.  To date, it will only advise that these are under review.

Independent retailers have praised MPs after an amendment to...

Inside the October edition of our monthly members’ magazine...

The NFRN and ACS have raised concerns about the...

26/03/2020
Hancocks have made the decision to temporarily suspend operations at their 19 Hancock Cash & Carrys, taking affect from 1.00pm on the 29th March.
Read More

02/04/2020
The Department of Agriculture, Environment and Rural affairs have written an open letter to thank Northern Ireland's food champions for their continued hard work during the Coronavirus outbreak.
Read More
This website uses cookies to improve your experience. We'll assume you're ok with this, but you can opt-out if you wish. Read More Cookie settings ACCEPT Reject
Privacy & Cookies Policy