NFRN Back The Sun’s Jab Army Campaign To Vaccinate Britain 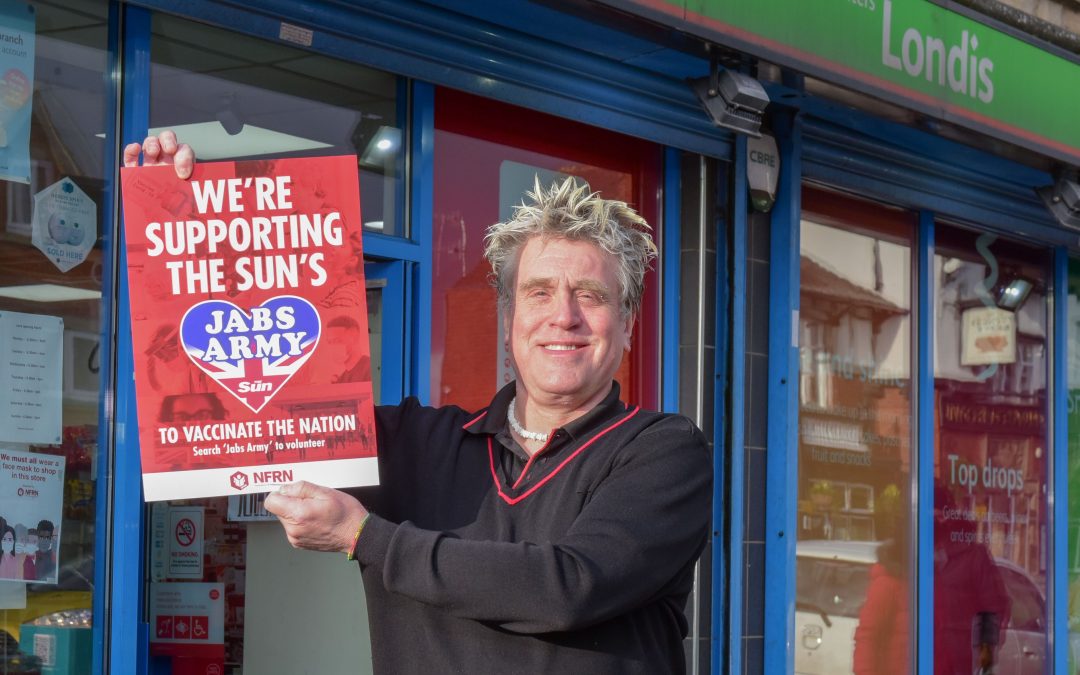 The NFRN is backing The Sun’s Jabs Army vaccine campaign which has smashed its target of recruiting 50,000 volunteers to help with the rollout of the Covid-19 vaccine.

The Sun editor-in-chief, Victoria Newton, thanked Sun readers for signing up and said: “I’m so proud that 50,000 Sun readers have signed up to help the national effort to roll out the vaccination programme. We knew our readers wanted to help in some way and it’s a testament to their generosity that so many have given up time to get involved.

“Thank you to all the businesses and organisations who have encouraged their staff to get involved and to everyone who has volunteered so far and offered support to The Sun’s Jabs Army.”

Pledging members’ support, National President Stuart Reddish was photographed putting up a Sun Jabs Army poster in his store in Sheffield. Stuart said: “NFRN members have been at the frontline throughout the pandemic, going above and beyond to keep their communities watered and fed, providing access to all the services their customers require and, most of all, keeping everyone safe. Up and down the UK, our members see firsthand the devastating effect that Covid-19 is having.  That’s why we, at the NFRN, are proud to back The Sun’s fantastic Jabs Army campaign. I will be calling on our 11,500 members to encourage their customers to get involved with the biggest vaccination programme in British history.”

The campaign has been backed by the NHS, PM Boris Johnson along with Labour leader Sir Keir Starmer, who said it was “another chance for all of us to do our bit to support the vaccine effort and defeat this virus”, and Health Secretary Matt Hancock, as well as the Oxford vaccine team who have called on the public to sign up along with other stars who have backed the campaign including Gary Lineker, Jeremy Clarkson, Matt Lucas, Gordon Ramsay, Prue Leith, Sarah Ferguson The Duchess of York and Piers Morgan.

Prime Minister Boris Johnson said: “This will be the biggest vaccination campaign in NHS history — and a monumental national effort such as this requires each one of us to do what we can to help. The Sun’s Jabs Army campaign is a brilliant example of the power of collective action.”

Health Secretary Matt Hancock said at the Downing Street briefing: “People are helping by being a community volunteer or signing up for clinical trials or the 50,000 people who now have signed up for The Sun’s Jabs Army – smashing the target in the battle against this disease and I want to thank each and every one of you and The Sun newspaper for leading in this part of the national effort.”

The Sun’s General Manager Jo Bucci said: “The Sun’s Jabs Army is another example of the power of Sun readers to drive positive action and make a tangible contribution to public life. Thank you to our retail partners and news category champions for all your hard work and for serving your communities so stoically throughout the pandemic.”

Britain’s biggest firms have also thrown their weight behind it to help get the nation vaccinated including BT, Morrisons, British Airways, PaddyPower, Sky TV and others all backing the campaign calling on staff to sign up as volunteers to help the NHS achieve its historic victory over the pandemic.

After reaching its 50,000 target The Sun has launched Jabs Army Reserves. Signing up means you will be next in line when more steward volunteers are needed in your area as centres ramp up capacity. You can register at nhsvolunteerresponders.org.uk.

Retailers can also get involved by downloading The Sun Jabs Army poster on The Fed’s website to show their support and enter The Sun’s news bill competition. NFRN members will receive a free poster in the February edition of The Fed magazine, which will reach members this week.

Retailers should send a picture of The Sun Jabs Army poster displayed in store to growsales@news.co.uk to be entered into a prize draw to win £50 off their news bill.

The National Business Crime Centre has released a series...

Barclays Applauded for Acting on Retailers' and...

The NFRN is backing The Sun’s Jabs Army vaccine...

Business rates to be slashed if elected, Labour says

Independent retailers shocked at call for judicial review against DRS

17/03/2022
Independent retailers have reacted with shock to a report of a legal challenge against the proposed introduction of a deposit return scheme (DRS) in Scotland next year. According to the trade magazine The Grocer, the Scottish Grocers’ Federation (SGF) is...
Read More

21/02/2022
Independent retailers served by Menzies Distribution have reacted with dismay after learning that the news wholesaler is increasing its carriage charge by 3.5 per cent from April. The rise is due to take effect from Monday April 4, just three...
Read More
This website uses cookies to improve your experience. We'll assume you're ok with this, but you can opt-out if you wish. Read More Cookie settings ACCEPT Reject
Privacy & Cookies Policy