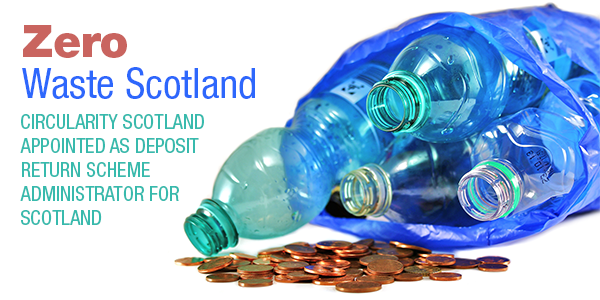 Circularity Scotland Limited has been announced as the new administrator to oversee operation of Scotland’s Deposit Return Scheme (DRS).

The Scottish Government confirmed today that it had approved the scheme administrator application of Circularity Scotland, a not-for-profit body which represents a combination of drinks producers, trade associations and retailers.

The DRS will require consumers to pay a 20p deposit when they buy a glass bottle, can or PET plastic container. The money is then reimbursed when the empty containers are returned, contributing to a circular economy.

Circularity Scotland will work with companies throughout the supply chain – from producers through to hospitality, wholesalers and retailers – to deliver a system that is expected to collect at least 90% of drinks containers across Scotland.

Zero Waste Scotland research predicts that 34,000 fewer plastic bottles, cans and glasses will be littered every day with the introduction of a DRS in Scotland. With thousands of return points set-up nationwide, £62 million a year could be saved tackling the indirect impacts of litter.

“The Deposit Return Scheme is a gamechanger for Scotland’s ambition to become a greener and cleaner country. It supports a circular economy and the Scottish Government’s ambitious plan to achieve net zero emissions by 2045.

“The appointment of Circularity Scotland as a Deposit Return Scheme administrator is a milestone moment – it allows us to begin delivering a world-class DRS that works for everyone. We will work closely with companies and trade associations throughout the supply chain to develop and operate a DRS system that works for all.”

“I am pleased to announce that Circularity Scotland Limited has been approved to operate as a scheme administrator of Scotland’s ambitious deposit return scheme.

“This is a significant milestone in a scheme which will improve the quality and quantity of our recycling, contribute towards our net zero targets and significantly reduce litter.

“I am grateful for the industry’s collective commitment to move ahead with the scheme, despite the pressures of COVID-19 over the past year and we look forward to working with them to make the deposit return scheme a success.”

“This is a huge milestone and a mark of the tremendous amount of work that has been done to prepare a practical and sustainable Deposit Return Scheme for Scotland. We’re extremely pleased that Circularity Scotland will be taking the scheme forward.

“Scotland’s DRS will be an important part of our journey towards a more circular economy, challenging throwaway culture and contributing to the fight against climate change: reducing emissions by nearly 160,000 tonnes of CO2eq each year – the equivalent of taking 83,000 cars off the road.”

In 2017, the Scottish Government first announced its ambition to introduce a DRS in Scotland to increase recycling rates and reduce litter. DRS regulations passed by the Scottish Parliament in May 2020 paved the way for drinks producers and importers to nominate a scheme administrator to fulfil the DRS obligations on their behalf.

Earlier this month, the Scottish Government commissioned an independent gateway review to assess the impact of the pandemic on the go-live date for the scheme, which is currently scheduled for July 2022.

It is estimated that 4million tonnes of CO2eq emissions will be cut over 25 years as a direct result of a well-designed DRS.

To receive information on the implementation of the DRS, Circularity Scotland is encouraging producers, retailers and members of the hospitality industry to subscribe for updates at circularityscotland.com/makecontact.

“The appointment of Circularity Scotland as the Deposit Return Scheme administrator is the next important step in getting DRS up and running and the NFRN welcomes this news. As the first retail trade association to support the introduction of DRS in Scotland, we now look forward to working on the implementation of the scheme so that our members – news and convenience retailers across Scotland – can assist their communities by providing return points. By doing so we can all help Scotland achieve its target of a 90% return rate.”

The Federation of Independent Retailers (The Fed) has welcomed...

Tomorrow, Wednesday 23rd September, The National Lottery have a...

Essex police have released the latest issue of their...

22/06/2020
The Scottish government have released an updated guidance checklist for retailers.
Read More

Make a pledge for cash

28/04/2021
NFRN members are being encouraged to protect cash as a payment method for those who rely on it by signing up to Which?’s Cash Friendly pledge.
Read More

01/09/2021
The funeral of Owen Church, NFRN National President between 1995 and 1996, will take place on Tuesday September 14 at 12 noon at St Mary’s the Virgin Church in Hemsby, Norfolk.
Read More
This website uses cookies to improve your experience. We'll assume you're ok with this, but you can opt-out if you wish. Read More Cookie settings ACCEPT Reject
Privacy & Cookies Policy