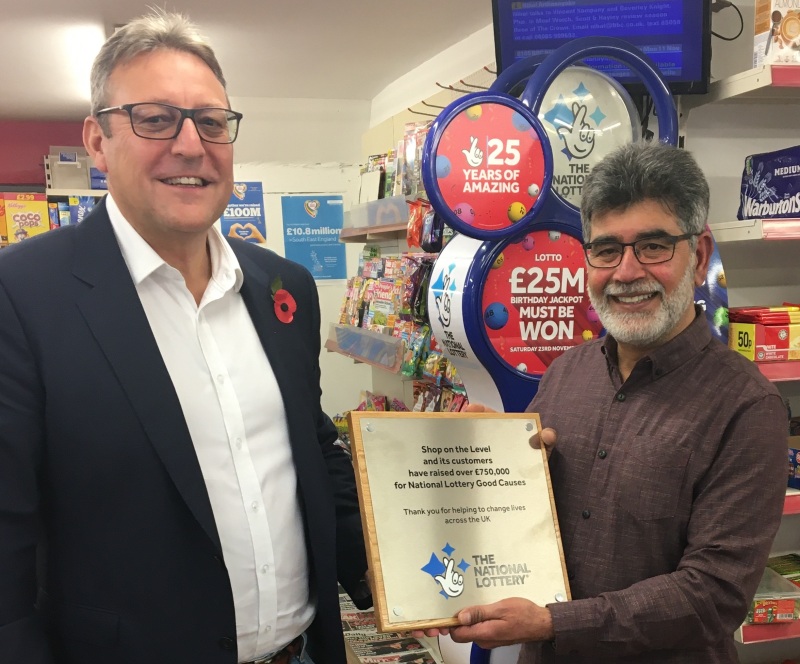 Picture: Nigel Railton presents a plaque to NFRN member Mustajab Haider (known as Tony to his customers) – owner of Shop on the Level in Brighton – to celebrate the store raising over £750,000 for Good Causes.

Camelot UK Lotteries Limited (‘Camelot’) today announced that, following two years of successive growth, it has further grown total National Lottery ticket sales for the first six months of its 2019/20 financial year (1 April to 28 September 2019) to a record £3,921.3 million – an increase of £465.0 million on the first half of 2018/19. Camelot’s impressive performance over the period shows that, 25 years on from tickets first going on sale (14 November 1994), The National Lottery is in its best-ever shape – with the work the company has carried out following its 2017 strategic review continuing to deliver for National Lottery players and Good Causes.

Announcing the results, Camelot CEO Nigel Railton said: “It’s 25 years to the day since we started selling tickets for that first Lotto draw, and our record half-year performance clearly shows that The National Lottery is in its best-ever shape. Not only are sales up across the board, but we’ve also delivered over £3.2 billion to Good Cause projects, players and retailers in just six months – underlining the incredible difference that, over two decades on, The National Lottery continues to make to the lives of people and communities throughout the UK. As passionate advocates for The National Lottery, our retail partners have played a crucial role in this success story – and I’d like to thank all of them for their continuing hard work and loyalty in what remain very challenging trading conditions.”

Camelot’s success over the half-year saw it generate £876.8 million (excluding investment returns) for Good Causes, £83.6 million more than in the first half of 2018/19. This equates to over £30 million every week and takes the total raised for Good Causes since 1994 to over £40 billion – 60% more than the most optimistic Government forecast at the time of The National Lottery’s launch.

National Lottery funding has now been awarded to more than 565,000 individual projects – an average of 200 lottery grants in every UK postcode. As well as contributing to truly world-class arts, sports and heritage projects of which the whole nation can be proud, The National Lottery is continuing to make a massive difference at a local level. With 70% of grants being for £10,000 or less, it is giving small, grassroots community projects a real boost at a time when other sources of funding are being, or face being, cut.

Over the same period, Camelot awarded £2,238.4 million in prizes to players, £265.3 million more than last year, and created 147 new millionaires. The National Lottery has now awarded over £73 billion in prize money and created more than 5,500 millionaires or multi-millionaires since its launch. Combined with the Lottery Duty it pays to the Government and the commission earned by its retail partners, Camelot continues to return around 95% of all revenue to winners and society – one of the highest percentages of lottery revenue given back in the world.

Camelot succeeded in growing sales across the board during the half-year – an achievement underpinned by its longstanding commitment to selling tickets in a socially-responsible way, with the company continuing to make its player protection activities best-in-class to ensure people can continue to play National Lottery games in a healthy, safe and enjoyable way.

Accounting for over 70% of all sales, retail remains the largest National Lottery sales channel. Over the period, Camelot grew in-store sales by £132.2 million to £2,757.2 million, underlining the effectiveness of the work it has been carrying out to forge even stronger relationships with its retail partners and to give them all the support they need to continue making the very most of having The National Lottery in their stores. As a result, National Lottery retailers earned £158.3 million in commission over the half year, £11.1 million more than in the first half of 2018/19.

Sales of draw-based games during the half-year increased by £300.3 million to £2,261.0 million, driven by improvements the company has made to offer a more balanced and appealing range of games that offers something for everyone. In particular, sales received a significant boost from the mega-jackpot EuroMillions game, which eventually rolled to a record £170 million before being won by a single UK ticket-holder in October. However, even without the exceptional EuroMillions roll series, it would have been a first-half sales record – clear evidence that the vital work that the company has been carrying out following its strategic review is paying off.

The National Lottery’s newest game, Set For Life, also had a strong start and has so far created nine winners of its top prize of £10,000 a month for 30 years since its launch in March. In addition, sales of the core millionaire-maker Lotto game have increased following Camelot’s introduction of new bigger, fixed cash prizes – including £1 million for matching five main numbers and the Bonus Ball – and jackpot ‘rolldowns’ where all cash prizes are boosted in ‘Must Be Won’ draws when the jackpot is not won.

The company also grew sales of National Lottery Scratchcards and online Instant Win Games over the period by £164.7 million to £1,660.3 million following improvements it introduced to give people greater choice with a wider range of differently-priced products with varying themes – including a special 25th birthday game which offers the best chance of winning £25 on a National Lottery Scratchcard, as well as Friends and Love Island-themed games.

“Although there is much work still to do, we’ve made a fantastic start to our 25th year and, with the exciting plans we have lined up for the next few months – including making the huge, rolling EuroMillions jackpot game even more exciting for players across the 10 participating countries – we’re confident that we’ll finish the year on a high.”

With our AGM fast approaching and as Wales is...

Total ban on vaping flavours is a step too far

16/04/2020
The government has created a business support hub to accumulate all of the relevant advice, measures and schemes amid the coronavirus outbreak.
Read More

27/09/2022
The Fed has voiced its disappointment over Reach PLC’s decision not to include pro rata profit margins as part of increases to the cover price of the Daily Star on Sunday.
Read More
This website uses cookies to improve your experience. We'll assume you're ok with this, but you can opt-out if you wish. Read More Cookie settings ACCEPT Reject
Privacy & Cookies Policy