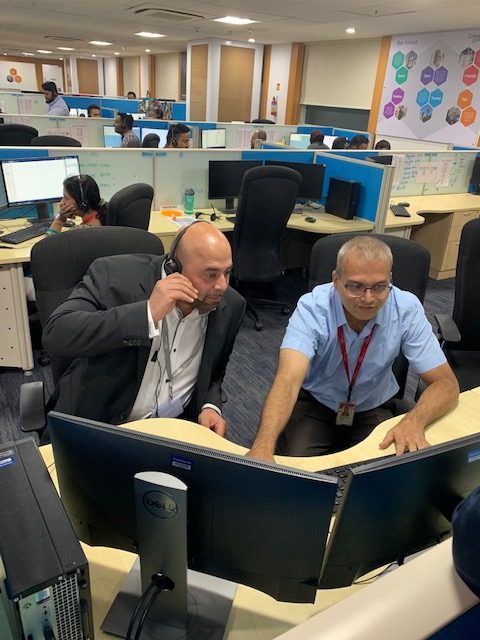 The NFRN and Smiths News have committed to work together more closely to help drive news sales and to enhance the service that retail customers receive from the news wholesaler.

The pledge was given during a visit by NFRN National President Stuart Reddish and Vice President Muntazir Dipoti (pictured left) to the new Smiths News call centre in Pune in India which was opened earlier this year.

Speaking after the visit, National President Stuart Reddish said: “Moving its call centre to Pune was a big step for Smiths News and it was important that the NFRN could view the operations at first hand so we could be reassured that there would be no drop in service for its retail customers.

“What we saw while we were out there was a very professional and capable operation.  Both Muntazir and I were able to listen into some of the calls from Smiths News customers and it was clear that the operators were keen to ensure that issues were resolved as soon as possible

“By visiting Pune the NFRN demonstrated its clear commitment to working more closely with Smiths News and I am pleased that Smiths News has also pledged to collaborate more closely with us. As a result of discussions with Jonathan Bunting, the Smiths News Chief Executive, we will be setting up a joint focus group which will meet twice a year to discuss ways in which the news wholesaler can enhance its service to retailers and to ensure that industry issues are resolved  in collaboration with the NFRN.

“Smiths News has further committed to a significant spend with the NFRN  over the coming year.  Normally, such positive moves would take weeks to thrash out but this has been achieved more speedily by the NFRN’s attendance in India and through  our access to its top level management while out there.”

As part of the week-long visit, and at the invitation of Booker Chief Executive Charles Wilson, Mr Reddish and Mr Dipoti also spent time in a Booker depot in Pune to understand how it operates and to discuss the different challenges facing independent retailers in India.

They also visited the offices of India’s biggest selling newspaper, The Times, which has a circulation of 3.5million copies a day. During a tour of its printing plant, Mr Reddish and Mr Dipoti heard how its stockists receive a margin of 35 per cent for handling the title.

The NFRN representatives explained the impact of...

£2.5 Million Support Given By The Welsh Government To Businesses Hit By Flooding

05/03/2020
The Welsh Government has made £2.5 Million emergency funding available to businesses hit by flooding caused by Storms Ciara and Dennis.
Read More

29/04/2022
The Food Standards Agency (FSA) are urging retailers to make sure that they have removed all Kinder products linked to an outbreak of salmonella from their shelves. The details of the recalled products can be found in the table below....
Read More