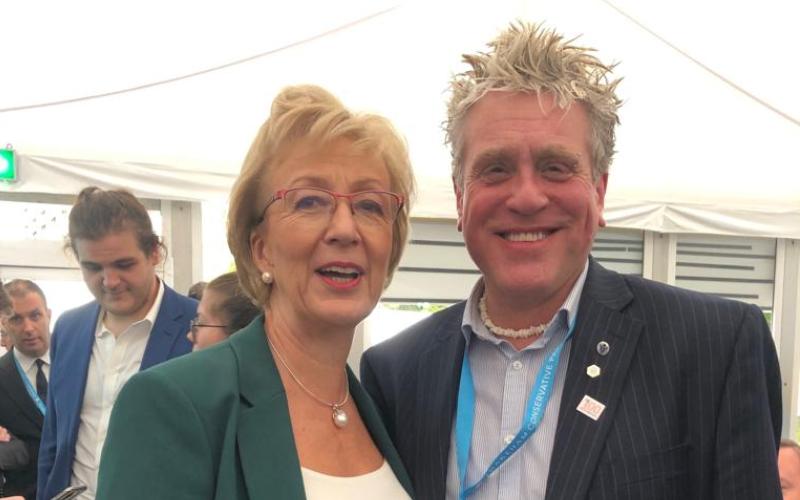 Following up on the unexpected announcement on 30th September of an increase to the minimum wage to £10.50 an hour over the next five years, NFRN National President Stuart Reddish was keen to ensure that Andrea Leadsom, the BEIS Secretary of State understood the impact this move would have on small businesses.

During the “Conversation with Rt Hon Andrea Leadsom” event held on 1st October at Conservative Party Conference, Stuart commented that whist NFRN members all wanted to pay their staff as high a wage as possible he needed to press the point that smaller businesses were also dealing with a number of other pressures including shop theft, business rates and making tax digital. He therefore asked if there could be any government aid to soften the blow for smaller businesses like the 15,000 independent stores he represented.

Responding, Andrea Leadsom said that she understood the points that he made, but felt the Government were trying to protect these businesses by ensuring everyone in the business, including owners that were often working overtime, got the recompense they deserved.

Speaking afterwards, Stuart Reddish said: “I understand that the government would not want to commit to providing extra financial help without wanting to ensure the sustainability of such a move. I also understand the government’s aims with this policy and have always paid my staff a good wage. However, I will be looking at ways in which we can collaborate with the government to ensure the implementation of this policy takes into consideration the fact that businesses are often working on a small margin which will be further eroded by this change. I therefore urge the government to consult with organisations like the NFRN to make sure that this policy doesn’t have the opposite effect on businesses than was intended.”

Now that the district has taken the momentous decision...

Scotland's PPDS - everything you need to know

The new legislation coming into force in Scotland from...

With the furlough scheme closing to new entrants on...

Deadline Day Approaching For Violence And Abuse At Work Survey

20/01/2021
Members and their staff who have been the victims of violence and abuse at work have until Friday January 22 to respond to a survey as part of a government inquiry into the subject.
Read More

05/11/2020
JTI have released a letter to trade partners amid the second lockdown.
Read More

27/03/2020
Following parliament's decision to rise on Wednesday for the Easter recess the long anticipated government's response to the Call for Evidence on retail crime has been delayed.  It was expected at the end of this month.
Read More
This website uses cookies to improve your experience. We'll assume you're ok with this, but you can opt-out if you wish. Read More Cookie settings ACCEPT Reject
Privacy & Cookies Policy