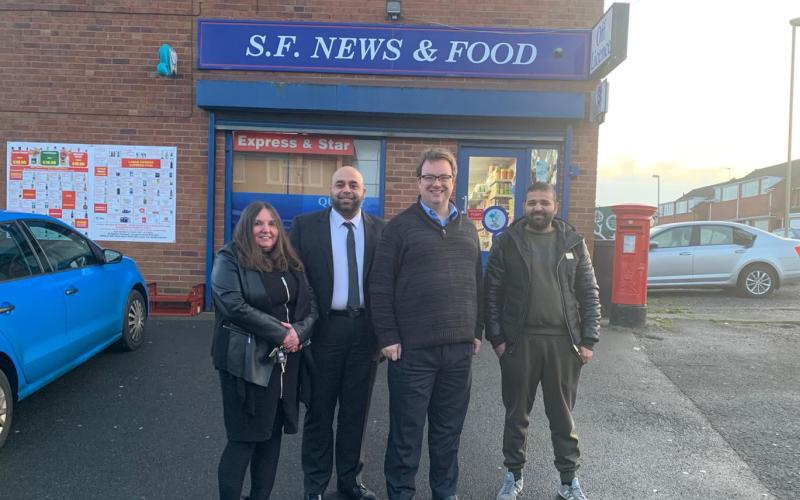 Dudley South parliamentary candidate Mike Wood took time out from the general election campaign to discuss retailers’ concerns about retail crime with representatives from the NFRN.

Meeting at a local convenience store in Kingswinford on Small Business Saturday (November 30), Mr Wood, who has been the local MP since 2015, spoke with NFRN West Midlands District President and Dudley retailer Julia Bywater and National Vice President Muntazir Dipoti about the challenges presented by retail crime, particularly the impact on police response times caused by the closure of police stations and the inadequacy of sentencing when dealing with shop theft and knife crime.

NFRN West Midland President Julia Bywater said: “The closing of local police stations and the consolidation of officers into central hubs is leaving local retailers feeling isolated without police back up when there is an incident in their store.”

Mrs Bywater continued: “Local neighbourhood teams are great but a lack of continuity in the team membership is not helping to build relationships between the police and local communities.”

Commenting on the use of violence in robberies, NFRN National Vice President Muntazir Dipoti said: “The increasing use of violence is having an impact on retailers that is more than just the financial affect. The psychological effect can leave retailers and their staff afraid to go back to work.”

Mr Dipoti continued: “No one should be subjected to physical or verbal abuse at their place of work but in too many cases those who attack retailers are given lenient sentences by judges who do not follow the sentencing guidelines.”

The answer, Mr Dipoti concluded is “not to abolish short sentences but to ensure that those who commit the crime face the consequences of their actions.”

Dudley South parliamentary candidate Mike Wood said: “Retail crime is particularly damaging to small and independent retailers, who sit at the heart of our community. Every item stolen threatens the survival of these crucial local facilities and appropriate punishments must be used against those that perpetrate such crimes.”

As a result we of reported disruption at our...

As part of the government's comprehensive package...

On Monday 18 October, The NFRN met with representatives...

08/07/2020
The Federation of Independent Retailers (NFRN) has expressed shock at the news that Reach chief operating officer Neil Jagger is to leave the newspaper publisher.
Read More

New Restrictions In Derry And Strabane

02/10/2020
Cafes, restaurants, pubs and hotels in the Derry and Strabane council area are to be placed under new restrictions to try and curb the spread of Covid-19, First Minister Arlene Foster has announced.
Read More