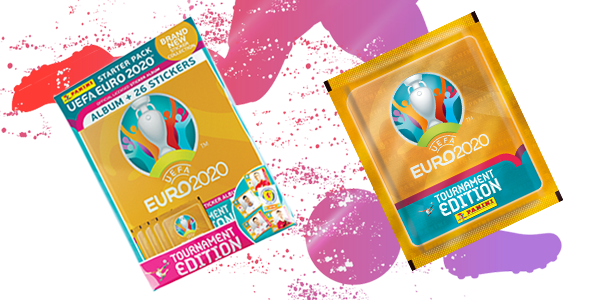 This eagerly awaited collection features the best of European football, packed with statistics and fun facts.  It is also bigger and better than ever, with 678 stickers to collect.

All 24 qualifying national teams are represented and for the very first time, 23 players are featured for each squad. There are special stickers covering every aspect of the competition, with information about the host cities and the history of the tournament.

Fans can kick-off their collection with a starter pack, which includes a sticker album plus 26 stickers. Collectors can also treat themselves to a premium edition hardback album.

“The sense of anticipation for our UEFA EURO 2020™ Tournament Edition official sticker collection is huge. Panini sticker collections are the sparks that ignite fan excitement for international football tournaments, and this year will be no different.

“We have created a fantastic product which our collectors will have great fun swapping and completing, and will want to treasure and keep over time.”

The collection will be supported with a heavyweight TV and digital campaign, a national newspaper promotion, nationwide sampling initiatives and a social media campaign.

The Government of Ireland have released a poster to...

Rishi Sunak has announced that the furlough scheme will...

Call For Review Into Fairness As Newspaper...

The Federation of Independent Retailers (NFRN) has renewed calls...

Shopworkers Could Be Among The First To Receive Covid Vaccinations

12/01/2021
The Federation of Independent Retailers (NFRN) has welcomed the announcement that frontline shopworkers could be some of the first people to be vaccinated in the next stage of the coronavirus vaccination programme.
Read More

10/06/2021
Following the announcement of Mike Miram’s retirement from his position as Chief Executive Officer of NewstrAid, the trustees are pleased to announce that Neil Jagger has been appointed to the role, with effect from 13th September 2021.
Read More