Shop Assistant Wins £10,000 a Month for a Year in National Lottery Draw 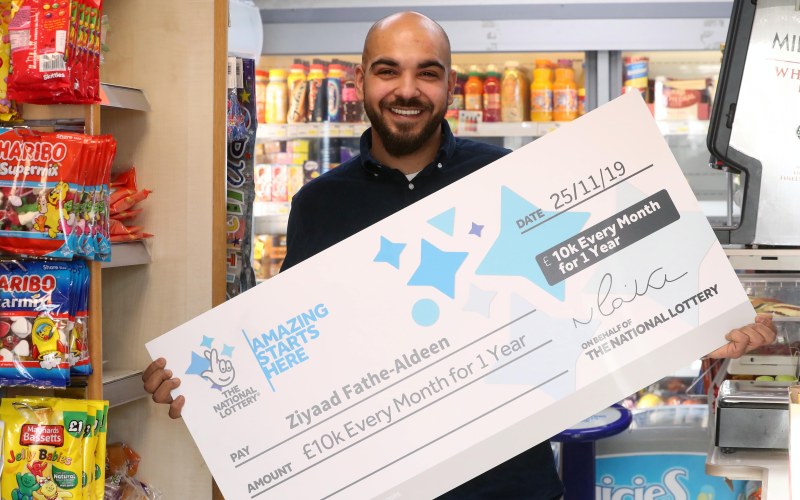 A South Wales shop assistant has won £10,000 a month for a year after playing The National Lottery at the NFRN member store where he works.

Ziyaad Fathe-Aldeen, 31, won the prize after matching the five main numbers in the Set For Life draw on November 25. Ziyaad said he had only played The National Lottery once before, buying a EuroMillions ticket a few months ago. He bought his winning ticket at the shop where he works – the Premier Stop, Gloucester Court, Caerleon – after being inspired by customers buying tickets.

“A few of them were buying tickets so I thought I would have a go, and I bought a Lucky Dip. You’ve got to be in it to win it! I gave the ticket to my girlfriend Nicola to keep safe. The next day I was back in work and she came in shaking. She said: ‘I think you’ve won’. I checked the ticket through the machine and it said I needed to contact Camelot. I was in shock.

“Obviously, Camelot needed to complete various checks because I bought the ticket at the shop where I work. Understandably, that took a bit of time to complete but now I can really celebrate,” said Ziyaad.

Ziyaad says he wants to let the win sink in before deciding what to do with the money but says he will travel.

“I love the historic sites such as the pyramids and Machu Picchu and I want to see a few other places so there will be a world tour! And it was my girlfriend’s birthday on Friday so I treated her to a nice meal and day out.”

How retailers can maximise their lottery sales and gain rewards

Don’t forget to also take advantage of Camelot’s AllStars rewards programme, which includes the chance for retailers to win £10,000 through its ‘Site, Stock, Sell’ quarterly prize draw! The programme is accompanied by a bespoke rewards scheme in which retailers can earn cash rewards throughout the year.

Panini have announced the launch of a brand new...

Scotland's PPDS - everything you need to know

The new legislation coming into force in Scotland from...

With fireworks night and New Year’s Eve soon to...

20/01/2021
The latest figures released by the government show that the retail sector is one of the biggest beneficiaries of financial support during the Covid pandemic.
Read More
This website uses cookies to improve your experience. We'll assume you're ok with this, but you can opt-out if you wish. Read More Cookie settings ACCEPT Reject
Privacy & Cookies Policy