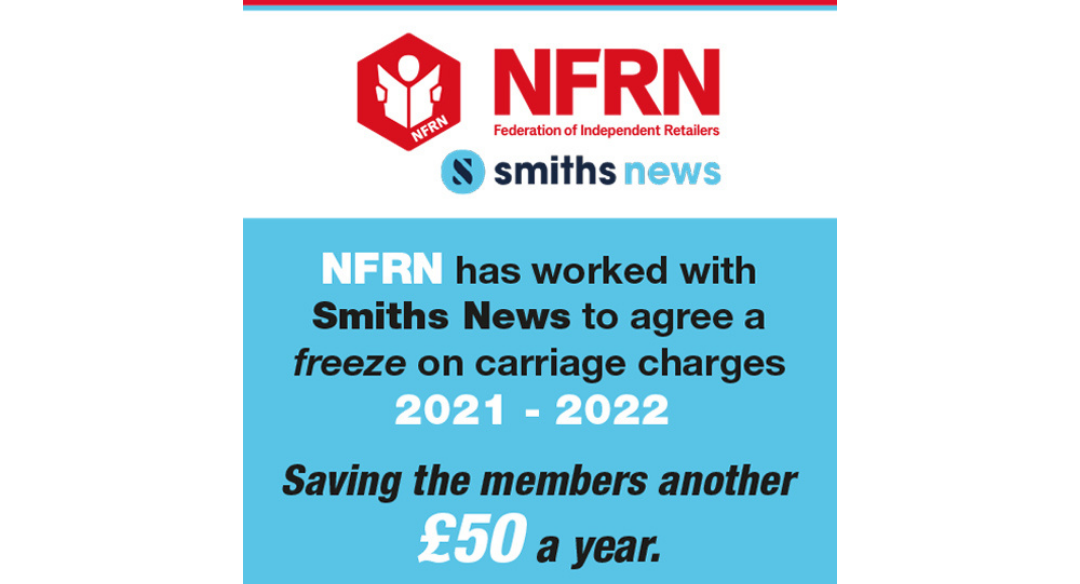 The Federation of Independent Retailers (NFRN) has praised Smiths News for acting on its members’ concerns by suspending any review of its carriage charges for 12 months.

NFRN National President Stuart Reddish said: “In such uncertain times for independent retailers, this announcement of a freeze on carriage charges for at least a year is very welcome.

“This move is also indicative of the strong working relationship that the NFRN enjoys with Smiths News.  For some time, I have been discussing the financial difficulties that members have suffered from the coronavirus pandemic with Smiths News CEO Jon Bunting and it is clear that the news wholesaler has not only listened to our concerns but is now acting on them, by suspending any review of the charges for at least a year.

“We are delighted that Smiths News is displaying such strong support for its retail customers during times of such hardship.”

Under the present carriage charge structure, Smiths News customers pay a minimum of £36.22 for a weekly supply of newspapers and magazines.  The maximum charge is £61.45. Previous carriage charge reviews have resulted in average increases of up to 3 per cent. This means that some customers could save as much as £96 this year on their news bill.

It is only the second time that the news wholesaler has taken such action.  In 2015, Smiths News gave its retail customers the option of freezing their carriage charges for two years.

Mr Reddish said he will write formally to Mr Bunting to thank the Smiths News’ board for its actions.  The NFRN will also be calling on Menzies Distribution to follow suit.

Earlier this year, News UK DTR (Direct to Retail) advised that it was deferring its review of carriage charges until March.

Due to the restrictions surrounding the Covid pandemic and the uncertainty of retailers’ trading patterns, News UK DTR (direct to retail) has deferred its review of carriage charges for three months.

Smiths News CEO Jon Bunting said: “We are incredibly mindful of the efforts our customers have gone to during the pandemic to ensure newspapers and magazines were available for their customers. Many are still under considerable pressure with lockdown. In speaking to the NFRN and others in the industry I am regularly reminded that many have gone above and beyond for their communities in the last year. In making this announcement we are hopeful that the NFRN and all our customers will see this as a positive move that provides some support to newspaper and magazine retailing after such a difficult period.”

Smiths News have released a statement on the reported...

Smiths News have released a letter to...

Smiths News - A Letter For Anyone...

Smiths have released a letter for those supplied with...

19/03/2021
Smiths News has released a letter regarding alterations and opening times for the Easter Weekend.
Read More

18/05/2020
Smiths News have released a letter to retailers about the new delivery away time functionality on SNapp and SNapp online.
Read More

Smiths News – Magazines Due To Be Recalled During Lockdown