Lockdown anniversary: It was the best of times, it was the worst of times 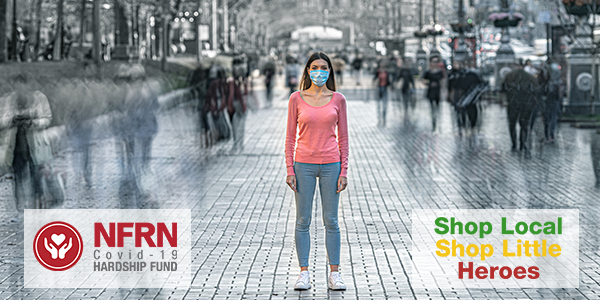 On the anniversary of the first lockdown, NFRN National President Stuart Reddish reflects on the past year for independent retailers.

If, as the old adage says, a week is a long time in politics, then the last year in retail seems like a lifetime.

When the Prime Minister announced the first national lockdown on March 22 last year, nobody knew what the future held and how long the situation would last.

Despite all the uncertainty and unprecedented changes to everyday life that the Covid pandemic presented, retailers throughout the UK and Ireland rose to each and every challenge.

The NFRN quickly responded to the first lockdown by launching its highly successful Shop Local, Shop Little campaign to support its members, and more and more people turned to their smaller local stores for their essential goods.

Sadly, some businesses have faced ruin by being forced to close their doors for months, while those that have managed to stay open have had to introduce social distancing, protective screens and the wearing of face coverings to safeguard their customers and staff.

In spite of all the difficulties and personal risk presented by the pandemic, thousands of retailers have continued to go above and beyond to serve their communities. Many have introduced home delivery services for the elderly and vulnerable, while others have increased their charitable work by providing food and other essentials free of charge to the needy.

The NFRN soon realised that some of its members were struggling and needed financial help to see them through these hard times. With support from its districts and branches and retail partners, the Covid-19 Hardship Fund was created, reaching a total of £250,000.

So far £125,000 has been paid out in grants to more than 100 businesses suffering severe financial difficulties caused by forced closure or decimated footfall due to the government restrictions.

However, a major negative among all the positives provided by the retail industry has been the increase in verbal and physical attacks on shopworkers.

This prompted the NFRN to launch a poster campaign – Be Kind, Be Patient – which urged people to wear face masks and treat staff and other customers with respect while shopping in their local stores.

While the vast majority of customers appreciate the hard work and determination of retailers to serve and protect them, unfortunately a small minority have continued to verbally and physically assault staff, particularly around the issue of enforcing the wearing of face coverings.

This is completely unacceptable. The NFRN has stepped up the pressure on the government to introduce tougher punishment for those who carry out these despicable crimes and will continue to lobby MPs to provide the protection that shopworkers deserve.

To say the last year has been hard for businesses is, of course, a huge understatement, but I am extremely proud of the way our members have responded to the challenges.

Now, as we come out of this latest lockdown, hopefully we can all look forward to a better and brighter future.

Starting up a Store2Door Service

Key factors to consider before starting a Home Delivery service.

Menzies has issued a business update regarding newspaper distribution...

Government is failing to protect shopworkers

NFRN has accused the UK government of failing victims of retail...

17/03/2021
Nick Thomas-Symonds raises the issue of attacks on shopworkers during a Commons debate on the Police, Crime, Sentencing and Courts Bill.
Read More
This website uses cookies to improve your experience. We'll assume you're ok with this, but you can opt-out if you wish. Read More Cookie settings ACCEPT Reject
Privacy & Cookies Policy