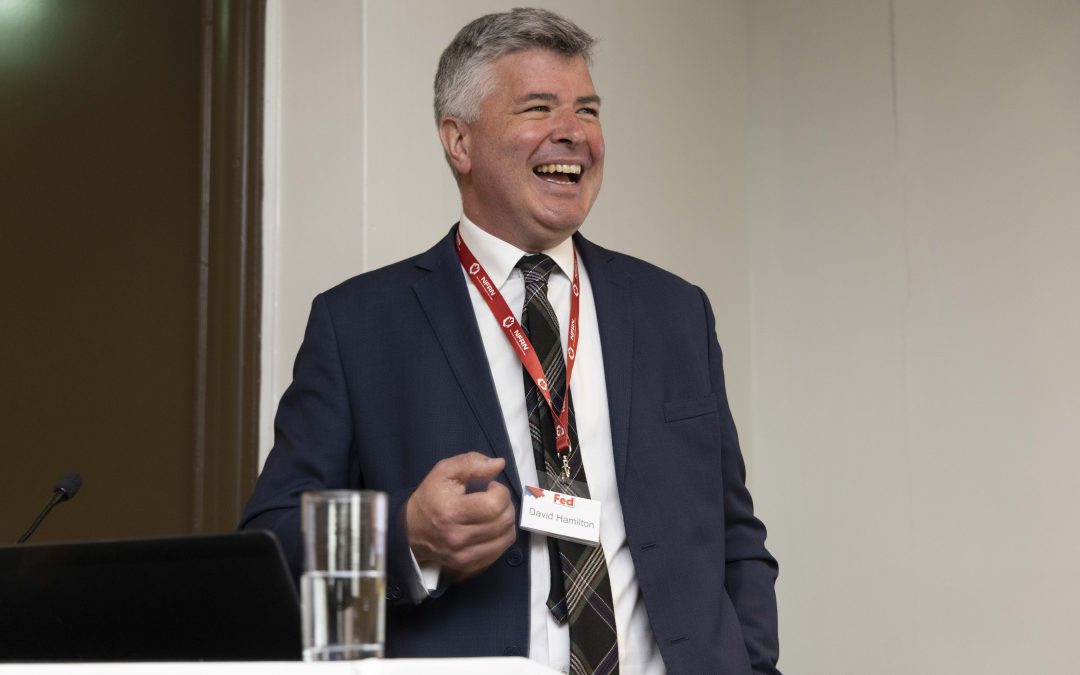 The energy crisis, the ongoing issue of retail crime, the future of retail and the forthcoming DRS scheme came under the spotlight at the Scottish trade and business conference in Glasgow.

Held at the city’s Crowne Plaza Hotel, the event began with the National President’s dinner on Monday, March 28.

After a drinks reception, over 100 members, guests and suppliers enjoyed a three-course meal, followed by entertainment from comedian Raymond Mearns.

A raffle raised almost £700 for the charity known as the Chicken Dinner Lady. East Lothian mum-of-three Jane Russell started the charity in 2020 after delivering free Sunday dinners to needy families.

The following day’s conference featured high profile speakers from the worlds of politics, policing and DRS.

First up to the podium was the leader of the Scottish Labour Party Anas Sarwar MSP. He kicked off his presentation by thanking independent retailers for all their efforts to support local communities during the pandemic.

He went on to talk about spiralling energy costs, calling for a windfall tax on energy companies and price caps for smaller businesses.

“It would be a tragedy if, having got through the two years of hell caused by the pandemic, businesses now fail because of the rise in energy prices,” he said.

He also paid tribute to Daniel Johnson MSP for getting the Protection of Workers Act passed by the Scottish Parliament but warned: “The legislation needs to be backed up, so it’s not just a piece of paper. The police and the Crown Prosecution Service must work together so that people can work with freedom from fear.

Tom Arthur MSP, the Scottish minister for public finance, planning and community wealth, focused on the importance of retail to the local economy and outlined the retail strategy “Getting the Right Change” which he published in March.

He said: “Our vision is for a thriving, successful and profitable retail sector in Scotland that is an exemplar for inclusive economic growth. This strategy can make that vision a reality and ensure that we do, indeed, get the right change.”

Mr Arthur added that he was in the process of establishing a new industry leadership group for retail to ensure the strategy is acted on. It will include representatives from retailers of all sizes, and from all parts of Scotland.

David Hamilton, chair of the Scottish Police Federation, spoke about retail crime and the problems it presents to independent retailers.

Mr Hamilton confirmed that, since Daniel Johnson’s Bill came into force, more than 1,000 crimes had been reported in the first three months.

He said: “Four hundred of these incidents were assaults, which in just three months is really quite staggering. Three of these were serious assaults on retail workers.

“The Bill highlights the problem – the difficulty is dealing with it. There is a pressure on policing, and budget cuts mean less officers supporting you. Having the legislation in place doesn’t prevent theses attacks but what it does is raise the issue.”

He urged retailers to report incidents and not to “underplay” them.

Police Constable Carole Wyllie, from the Scottish Business Resilience Centre, gave an excellent presentation on how to protect business premises from theft, attacks and anti-social behaviour.

She said the five main areas for business to concentrate on are good CCTV and lighting, the appearance of the inside and outside of your store and liaising with local police officers.

She added: “Get to know your local police officers – invite them into your store and tell them if you are having any problems. Criminals who see the police going into your store will move on to somewhere else.

“It’s also worth finding out who your local schools officers are. Young people are more bothered about punishment from their school than they are from the police.”

Ms Wyllie went on to talk about cybercrime and how retailers can protect themselves from this growing threat. Examples included making sure they have strong passwords and not clicking on links in suspicious emails from scammers.

Following an explanation of how DRS could look by Carla Brian, from waste management company Biffa, delegates learned more about reverse vending machines (RVM) from Zak Miller, head of sales and business development for Northern Europe at Sielaff.

Mr Miller explained that RVM was the best solution for retailers, as it avoids having to store returned items in bags for collection. He added that machines would be available in different sizes, based on the space a store has available and the amount customers returned.

Scottish president Ferhan Ashiq was delighted with how the day had gone.

He said: “Today has gone fantastically well. All the speakers were very informative and made a strong commitment to us as retailers.

“The fact that a government minister was willing to come here and listen to retailers gave us a fantastic opportunity to convey our messages.

“It was great that members were able to voice their concerns directly to people with real influence and get answers to their questions, and I’m sure they have taken a lot away from the day.”

View the image gallery from the event

View our selfie gallery from the event

Lockdown anniversary: It was the best of...

On the anniversary of the first lockdown, NFRN National...

Home Office questions on the increase in...

Covid-19 and lifting of restrictions: an update

Starting up a Store2Door Service

17/03/2021
Nick Thomas-Symonds raises the issue of attacks on shopworkers during a Commons debate on the Police, Crime, Sentencing and Courts Bill.
Read More
This website uses cookies to improve your experience. We'll assume you're ok with this, but you can opt-out if you wish. Read More Cookie settings ACCEPT Reject
Privacy & Cookies Policy